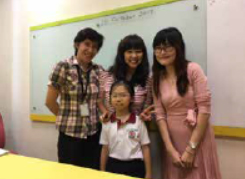 Megan was diagnosed with leukaemia as an infant. She suffered a relapse when she was around 4 years old. She had a bone marrow transplant and went through a difficult journey of recovery; overcoming low immunity and post-transplant effects.
Missing out the pre-school years, we deferred her primary school enrolment by a year. We placed her in MCYC’s specialist Literacy and Mathematics Intervention classes at the recommendation of a child development specialist. It is common for young children who have suffered from such major illnesses to require more intervention work on their attention span and critical thinking ability.

Since joining the programmes, Megan has benefited a lot. When she started mainstream kindergarten, she was not well-accepted in the class as the rest of them had grown up together since the nursery year. Megan started confiding in her teachers at iPEAK whenever she was feeling down and insecure. She also shared her happier moments too.

iPEAK provided a safe environment for her to learn at her own pace and not be judged by others. This conduciveness allowed her to slowly build up her self-esteem. In this caring environment, Megan learnt to encourage others too, telling others that it is okay to make mistakes just as she had. She learnt to help others in whatever ways she could. Now, even at only eight years old, Megan does not hesitate to reach out to those who need help; even if it is just to say a word of encouragement.