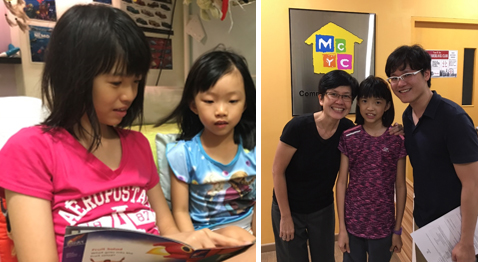 MCYC has been instrumental in helping my daughter, Megan, aged 10, learn to read. We first came to MCYC when Megan was in K2 with some concerns. At that time, we found that she was not picking up basic literacy skills at the same pace as her peers. She could not generalise words read in one context to another, and her phonological awareness was also patchy. This was despite efforts on the home front to support her as well as having the intervention of another language and literacy programme.

I do not know what magic Teacher Anne did during her sessions with Megan, but it was soon after we started with MCYC that Megan blended her first syllable independently. I will never forget the day that she did – we were driving back home along Clementi Road when she said “Yot”. I was initially puzzled, but Megan pointed to the large “Toyota” word printed on the back of a pick-up truck in front of us and said again, “Yot”. She continued, “Y-O-T, yot. Right mummy?” And then I realised that she had blended the “y-o-t” in “Toyota”. It is hard to describe the joy I felt at hearing that first syllable being uttered. We celebrated that day.

Since then, Megan has gone from strength to strength in terms of her literacy. Jovian, or Teacher Jo as Megan addresses him, continues to build on the work that Teacher Anne did with Megan. He brings to his lesson an earnestness and love for language and words, which he shares with the children. Where Megan was previously anxious about spelling to the extent that she would express reluctance to attend school on spelling days, she is now fairly confident and willing to try most of what is given to her to spell. In fact, her awareness of letter sounds and language rules exceed my own, and I find myself checking with her when in doubt. She is also able to read to and support her younger sister as she starts her own journey into reading.

Megan still has some way to go in terms of bridging the gaps in her expressive language, comprehension and writing. However, I remain grateful for the solid foundation that MCYC has laid for her and for opening up to her the world of reading and all its pleasures and knowledge. They have been consistently professional, nurturing and systematic in both teaching and tracking Megan’s progress. I know that Megan is in good hands and can only hope that all children who need support are as fortunate as my daughter.